Expansive growth of leaves or of reproductive organs such as silks are affected by water deficit before any reduction in photosynthesis or root growth. The objective of the Phenodyn platform is to perform a genetic analysis of growth and gas exchanges which vary rapidly with environmental conditions (see movie). In particular, we aim to disentangle the genetic basis of the differences in growth rate and of its responses to temperature, evaporative demand and soil water deficit. Time courses of elongation rate, transpiration and environmental conditions are dissected into more heritable traits (maximum rate and sensitivity) which are stable characteristics of genotypes, amenable to genetic analysis. Phenodyn has been used for detection of QTLs of sensitivity of leaf elongation rate to soil water deficit and evaporative demand1,2, for physiological analyses using transgenic or introgression lines5, and for analysing the genetic variability of growth and of its sensitivity to environmental conditions in panels of lines with different geographical and genetic origins. Phenodyn has been tested for maize leaves 1,2,3,5 and rice leaves 6 and for maize silks 4.

The Phenodyn platform (current throughput : 480 plants) imposes drought scenarios under fluctuating atmospheric conditions in the greenhouse or the growth chamber, and follows transpiration and expansive growth with a definition of 5-15 min over periods of 1-2 weeks. This allows identification of the genetic variability of response of growth and transpiration to environmental cues, and in a quantification of the sensitivity to abiotic stresses. The experimental set-up in the greenhouse consists in 140 balances which measure changes in soil water status and transpiration, 420 displacement transducers which continuously measure leaf elongation rate, and a set of climatic sensors. A companion set-up is placed in a growth chamber, with the same sensors for measurement of 60 plants simultaneously. Leaf or silk elongation rates are measured with rotational displacement transducers. They are transmitted to the sensor via a pulley which carries a thread attached to the leaf or silk tip and to a 20 g counterweight. Soil water content is estimated by continuously weighing columns. Differences in weight are attributed to changes in soil water content, after correction for the increase in mean plant biomass as a function of phenological stage. Soil water content is transformed into soil water potential via a water release curve corresponding to the potting compost. Air temperature, relative humidity and light are measured at plant level, with two series of sensors per block. The temperature of the meristematic zone of studied organs is measured with fine copper-constantan thermocouples. All data are averaged and stored every 5 to 15 min in the database. It was checked (i) that the procedure for estimating soil water content generates errors smaller than 3 g , i.e. an error in soil water content of about 6 10-4g, (ii) that a counterweight of 20 g does not cause changes in elongation rate of leaf or silks of maize. Conversely, it affects leaf growth of rice on the first day after emergence. 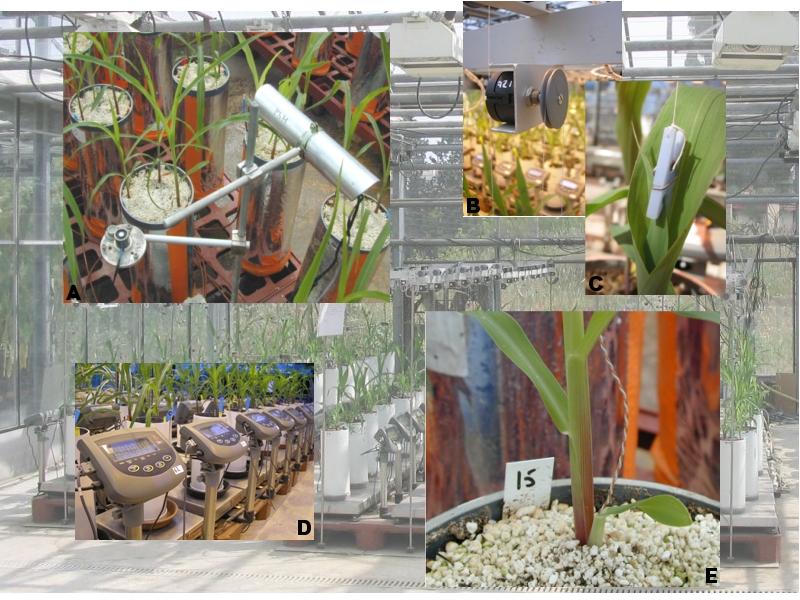 The phenotyping platform is associated to an information system for real time monitoring of experiments, post-analysis of large datasets (around 700.000 datapoints are generated in each experiment) and identification of genotypic parameters.

Two computers automatically send data to a database through wifi access every 5 to 15 minutes. Manual measurements on plants (ie. phenology) are also entered in the database using CSV files. Data are stored in an MySQL 5.0 database hosted on a Linux server. Database interface is based on PHP programs or HTML pages and some R scripts to generate elaborated graphics. We also use Ajax for a better user interaction. 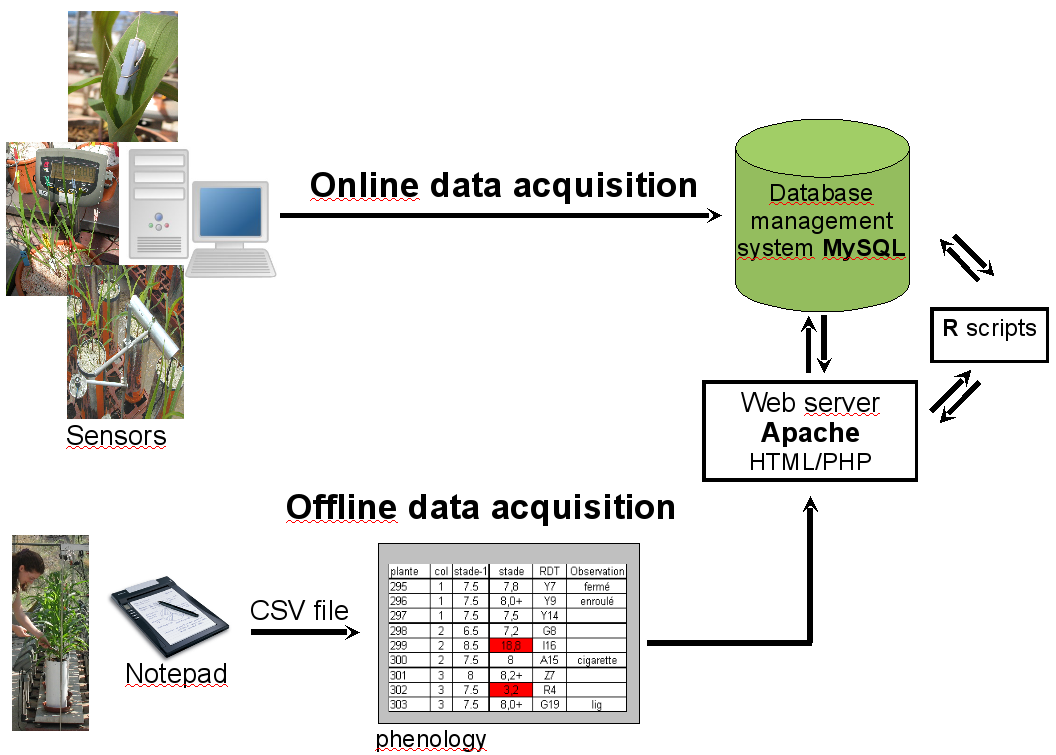 The system is based on a client-server architecture. Time-courses are visualised using PHP (jpgraph library) or R scripts. 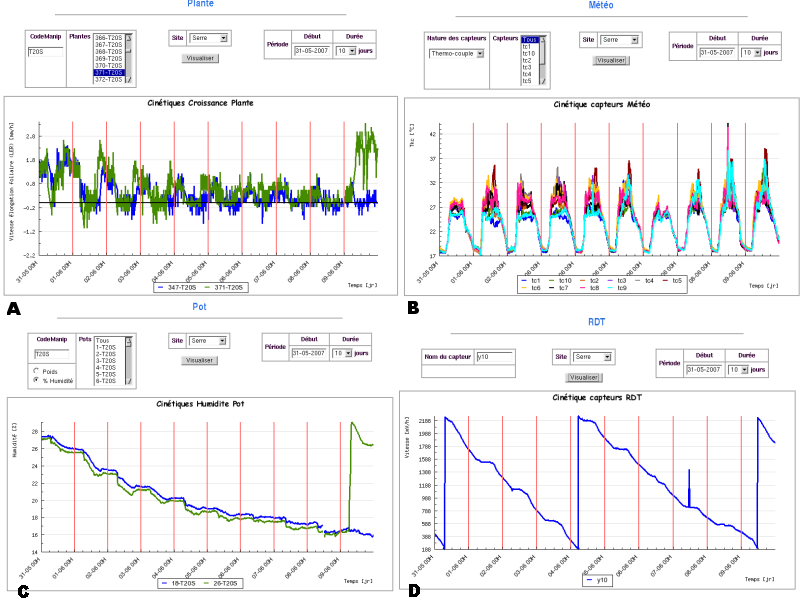 (A) plant growth rate, (B) micro-meteorological conditions sensed by the plants (meristem temperature), (C) soil moisture content of the pot in which plant grows up, (D) leaf or silk elongation rates.